An introduction to the history of
Dornoch Highland Gathering

While there were competitions in Throwing the Stone and Races it was 1887 before a group of men organised the first Dornoch Highland Gathering and became a constituted body with a bank account. We thought that we could not trace any records for earlier years and were pleased to find a copy of the Games Programme from 1900 from records of Cambusavie Estates.

Then on the afternoon of our 2020 AGM our President received a phone call that changed all our thoughts. Alasdair MacDonald, SHGA  North Rep., phoned with initial results from research he is conducting. The Inverness Courier carried a report of Athletic Games at Dornoch on Wednesday 14th October 1835 which is 52 years before we thought.

The report states, " the last three races afforded much merriment ........... several gentlemen appeared in full Highland costume ................ banners and music added to the gaitey of the scene.

The gentlemen present immediately formed themselves into a Club for the continuation annually of these manly exercises, and elected George Dempster, Esq. of Skibo, Captain of the Games for te next year, which were appointed to take place at Dornoch early in August.

We thought it was just in recent times that the name changed to Dornoch Highland Games from Gathering. This was to avoid confusion for the many foreign visitors that came to the Highlands and were asking “What happens at a Highland Gathering”. But our original title was as a Games and now we return to Games over 185 years from when events were first held on Dornoch Links.

We now know that the Dornoch Games were the 7th earliest Games in Scotland and the first Games north of Inverness in 1835. A coincidence is that 1835 was when Andrew Carnegie was born. The medal presented for the Open Piping is in memory of Mrs Carnegie Miller, Skibo and is presented annually by Miss Mary Miller Thomson, her granddaughter, who also presents the Robin Miller medal to the Open Heavy Champion.

So, five years after the death of King George IV and when King William IV came to the throne, the athletes of Dornoch were showing their strength and skill. This was only twenty years on from what has been called the "Highland Clearances"  largely by the estate factor, Patrick Sellar.

There are further scanned documents from the years 1925 through to 1929. 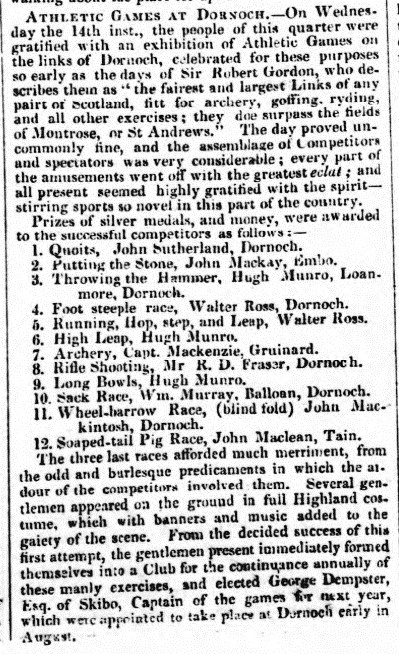 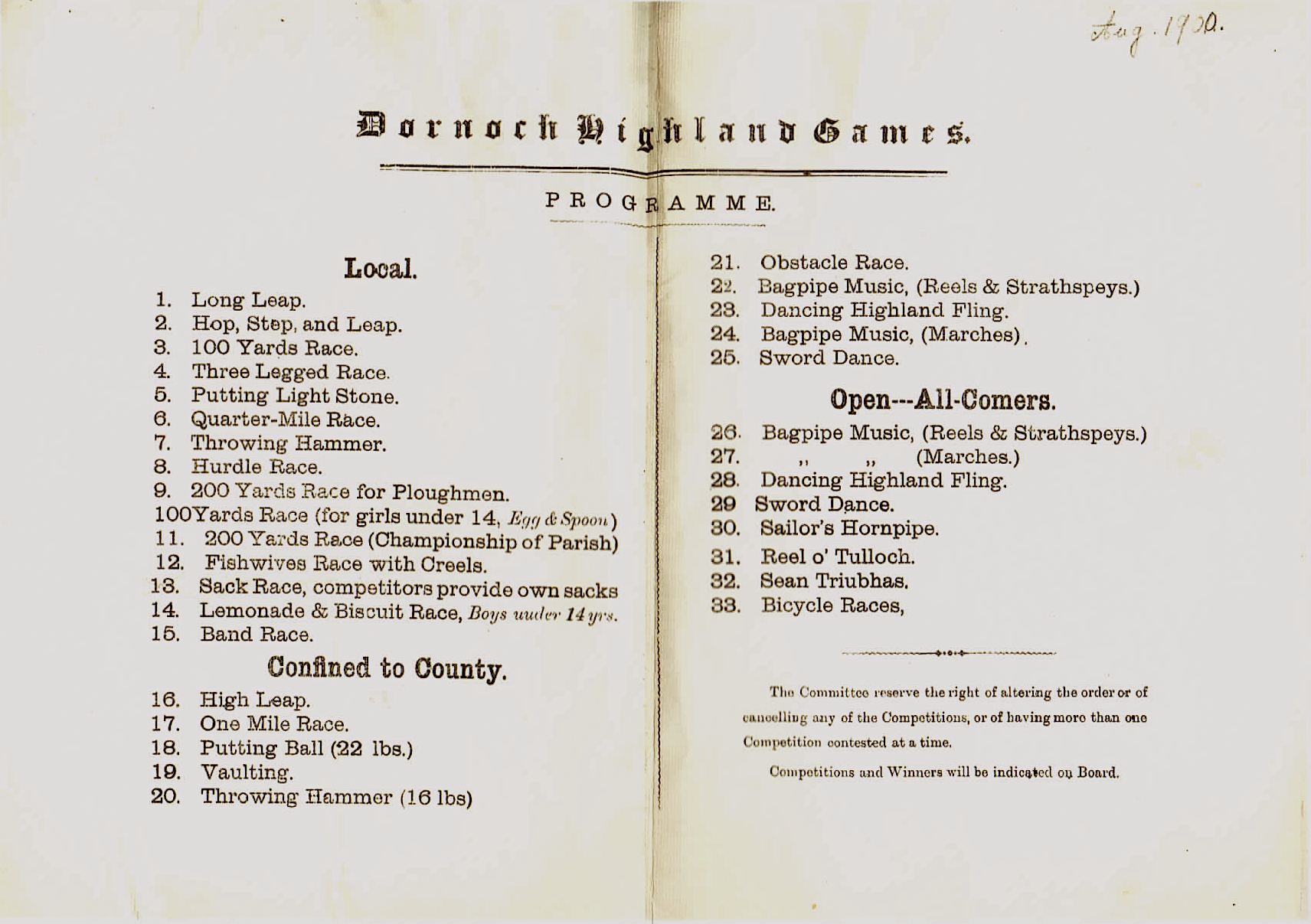 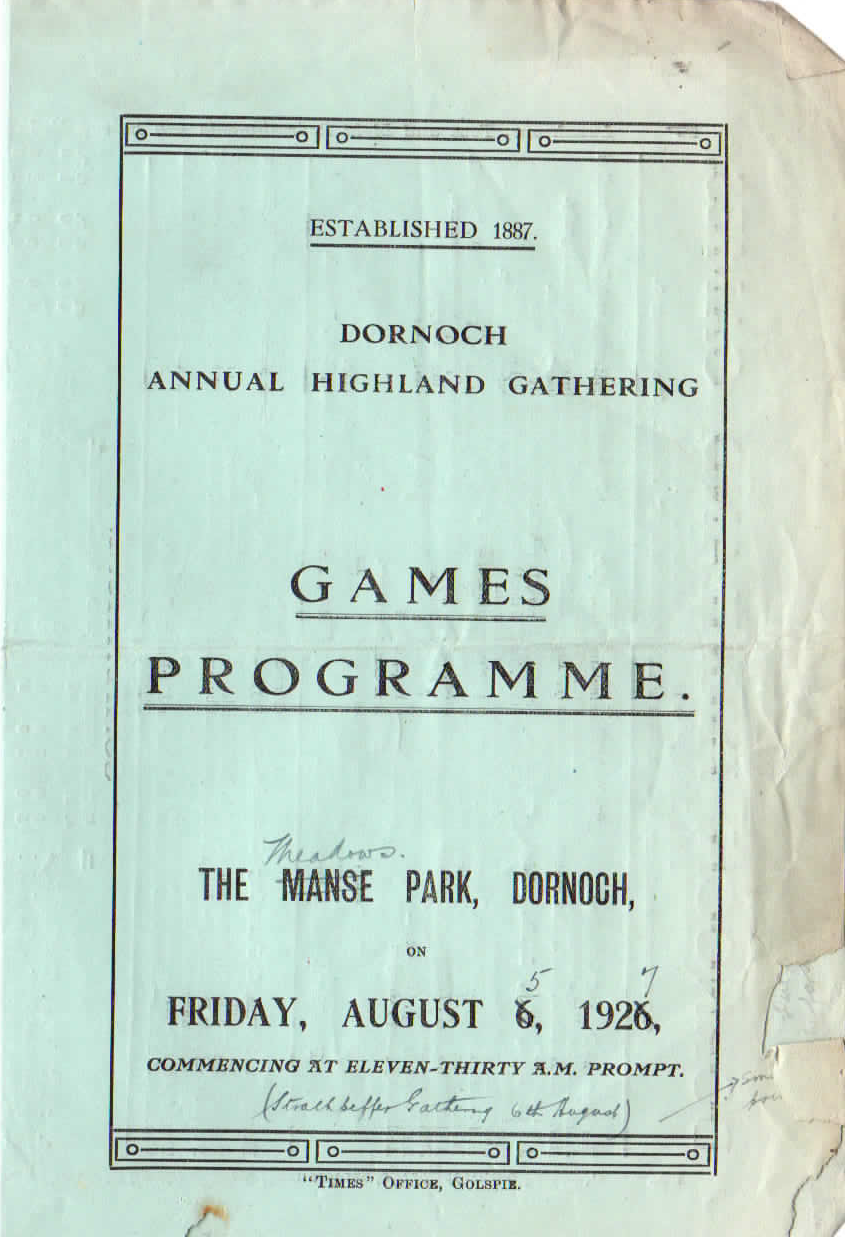 Viewing some of these documents shows the reader that there used to be Tug of War competitions; also, Horse Racing and there were many letters exchanged between Dornoch, Strathpeffer and Tain to come to an agreement on the date of the Games. Dornoch was always the Friday before Strathpeffer and the first Friday in August. However, one document shows the Games were held on Friday 10th August, but no reason can be found.

The list of Patrons, with some scanned letters to view, show how many well to do people supported the Games. Rail was the quickest mode of transport to the Highlands in the early 20th Century. Travellers had to change trains at The Mound and get the connecting small train to Dornoch. However, not for everyone. 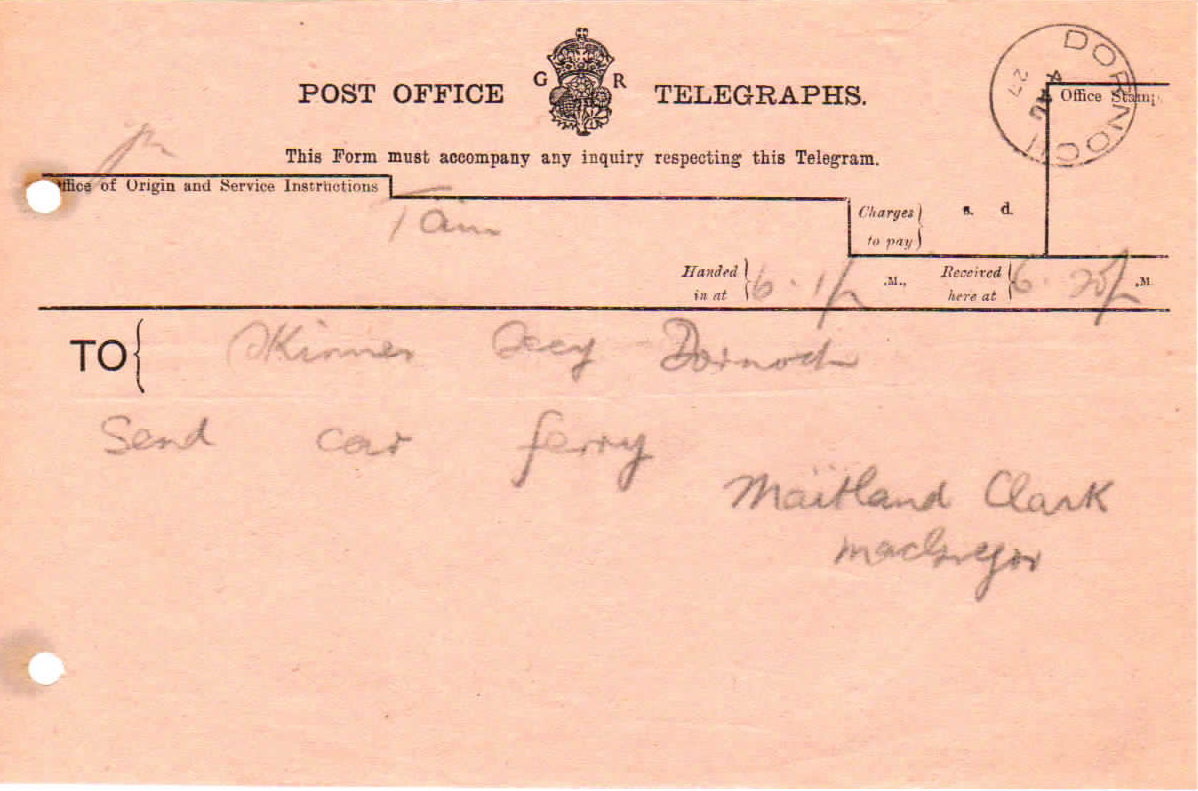 Up until 1926 the Gathering took place at Manse Park with the first use of the Meadows Park in August 1927.

Shifting through the scanned documents the reader will see letters from the Duke & Duchess of Sutherland and  a confirmation letter from Louise Carnegie, wife of Andrew Carnegie, and giving £2/2/- (two pounds & two shillings) payment.

Scanned copies of accounts can be viewed as well as a letter asking if a tent can be borrowed by Mr Edwards from Brora, as he had work to do in Drumbeg and there was no accommodation available.

Famous athletes made their way to Dornoch. Jean Swanson, World Highland Dancing Champion, competed regularly, and her husband John Robertson, was a Highland Games Track & Field Champion. Many were enthralled by the Heavy’s competition between Scotland’s famous Bill Anderson, sadly deceased in 2020, and England’s Arthur Rowe, who tried his hand on the Highland Games circuit after competing for Great Britain in both the Commonwealth and Olympic Games. Bill Anderson’s Heavy & Light Hammer Records still stand – now for over 50 years. 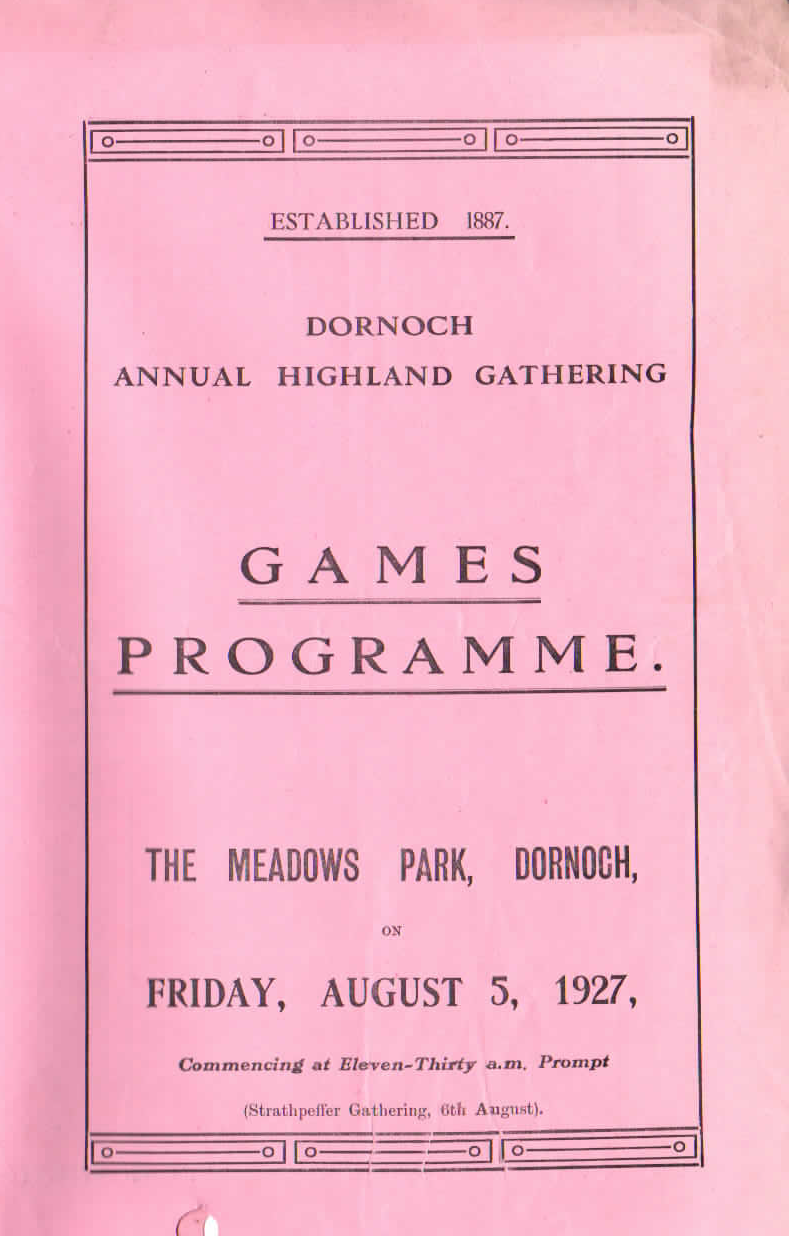 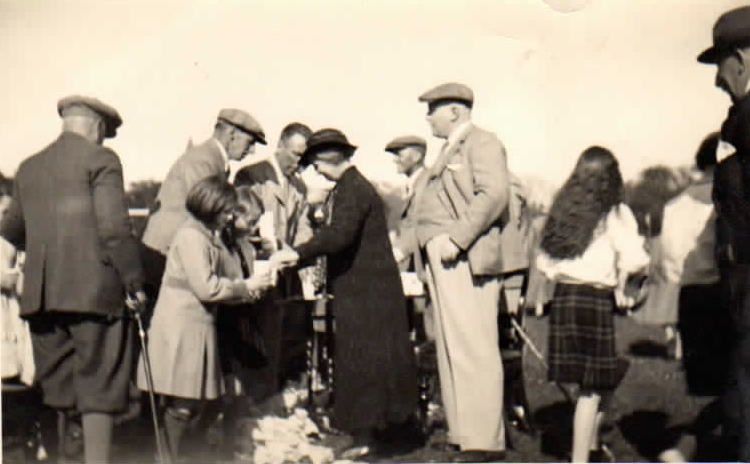 In recent years the tradition of the Chieftain’s March, led by the Dornoch Pipe Band, was resurrected. Nowadays as it leaves Dornoch Square with the Chieftain and President and the Past Chieftains the public who line Castle Street fall in behind and march all the way to The Meadows Park.

Other than the war years, the only other year that the Games were interrupted was 2008. The Local Events took place, but consistent heavy rain resulted in the afternoon’s main attractions the Open Events being cancelled. At the time of writing it looks very much as though the 2020 Games will not take place due to the COVID-19 pandemic. Enjoy look through the scanned documents and also the many images in the Gallery Section. We welcome further history of the Games and photos, old or new.

Preparation of the Field

Clerk of the Field